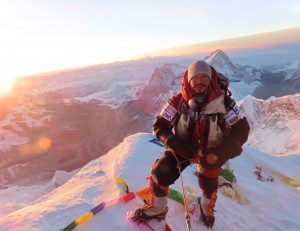 Osprey are proud to welcome new Athlete, Nirmal ‘Nims’ Purja MBE to the team. With over 16 years in the British Military, including Special Forces roles and more than 6 years in a Mountain Guide / Expedition Leader role, Nims now joins Osprey Europe.

Nims is currently attempting to climb the 14 x 8,000m peaks in only 7 months – Project Possible.

For Phase 1, Nirmal ‘Nims’ Purja MBE and ThruDark’s Jay Morton successfully summited Everest carrying an Aether Pro backpack. The current record, held by Jerzy Kukuczka is 7 years, 11 months and 14 days and highlights the immense challenge that Nims is undertaking. With several mountain rescues under his belt, Nims has both the background and mindset to undertake such a challenge. This challenge hit its’ first major milestone on the 22nd May at 5.40am, when equipped with both an Aether Pro 70 and a bespoke ThruDark summit suit, Nims stood atop the highest point on earth.

Both ascents were supported by an expert team with decades of combined experience. Among the support team were legendary Sherpas, Mingma and Jabu, whose resident experience was invaluable during the entire expedition.

This determination was also reflected in Jay’s ascent

“We originally planned to summit on the 16th but due to ill health I was unable to. We went from an 8 man team to a 4 man team. We all summited around the same time; it was an honour to be stood on the summit with the remaining 3 guys. They all individually earned it in their own way.”

Aether Pro builds on this heritage and extends the technical capability of the Aether backpack series. It can be stripped back to bare essentials for a streamlined and svelte companion or can retain the full featured componentry. With a superb comfort and fit, a lightweight design and technical fabric and build quality, this backpack is the ‘Everest of carry systems’.

“We look forward to supporting and sharing Nims’ future ascents as a key sponsor of Project Possible. His sheer determination to accomplish such a challenging project is very inspiring and as a team we are behind him every step of the way.”

ARE YOU PROTECTING YOUR BRAND?
A double Hattrick for Isbjörn!
Tweets by @SGBOutdoor
This site uses cookies in order to function properly and to allow us to improve our service. By using this site you consent to the use of cookies More info