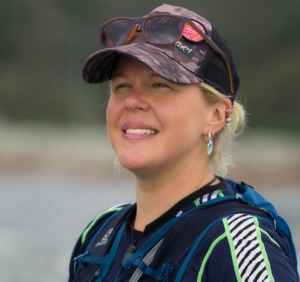 Kathmandu Coast To Coast is one of the most iconic multi-sport race in New Zealand. The race has been deemed ‘a rite of passage’ for multisport athletes from around the world and with over 20,000 people having completed the event in the 37 years to date, only the world’s best athletes succeed. The top athletes cover the entire course in close to 11 hours. The other end of the field sees some competitors in the Two Day race taking closer to 24 hours.

World record adventurer, Holly Budge, will attempt the race and traverse 243 kilometres of rugged terrain across New Zealand over a two day period using nothing more than her feet, a paddle and some peddling. Grit, sheer determination and a serious sense of adventure are just some of the skills needed to even make the start line of the Kathmandu Coast To Coast.

From summitting Mount Everest to racing semi-wild horses 1000 kilometres across Mongolia, Budge embraces a challenge. She uses her world record adventures, including being the first woman to skydive Everest, which was to raise awareness of the African Elephant crisis and raise funds for her charity, How Many Elephants. Holly founded the charity while she was studying for a Masters in Sustainable Design, six years ago. The charity’s mission is to stop the poaching of African elephants. Every day, 96 elephants are killed for their ivory which accounts for 35,000+ of these animals per year. This rate of slaughter will mean that it will take 10 years for extinction to be completed.

Described as “one of the UK’s most accomplished female adventurers”, Budge has teamed up with Kathmandu as a Coast to Coast Race Ambassador and is currently based on the remote West Coast of New Zealand where her Kiwi husband works as a helicopter pilot. Franz Josef Glacier has provided a dramatic and perfect backdrop for Holly’s Coast to Coast training.

“Kathmandu Coast to Coast will push me way out of my comfort zone and challenge my every fibre. I’d never been on a road bike, I’m not a natural runner and am learning to kayak especially for this race. I have a fear of fast-moving water which I’m working hard to overcome. I feel confident I can transfer the skills I’ve learnt in other extreme challenges to give me the persistence and sheer determination I will need to pull this off. My motto is ‘think big, dream bigger’” says Budge.

The Kathmandu Coast to Coast Race is an iconic historic event and one of the world’s longest-running multi-sports events. Each year, over 2000 competitors attempt to complete this gruelling race: Budge will run 33kms over rocky and uneven terrain, kayak 70 kilometres down the mighty Waimakariri River and cycle the remaining 140 kilometres. The race starts on the West Coast at Kumara Beach and traverses the width of the South Island, crossing the main divide and finishing on the East Coast on New Brighton Beach in Christchurch.

Budge’s career as an adventurer started in her early twenties whilst she was backpacking around New Zealand. She did a tandem skydive in Lake Taupo and firmly believes that that sixty seconds of adrenaline (and sheer terror!) changed the course of her life forever.

It hadn’t occurred to her that people were getting paid to jump out of aeroplanes for a living. Funnily enough, Budge’s school careers advisor hadn’t mentioned this to her.  She decided that was the job she wanted. Six months later, with lots of training, dedication and hard work, she achieved her rather far-fetched goal and was employed as a freefall camerawoman in Lake Taupo, getting paid to jump out of planes up to ten times a day, every day!

On reflection, Budge refers to this as the ‘boldness’ of youth as when she set herself that goal, she knew nobody in New Zealand, she knew nothing about skydiving or filming but none of that mattered because she knew she could learn those skills, or at least try.

Achieving this goal gave Budge immense confidence and self-belief that she could achieve whatever she set her mind to and follow her passion for adventure. This positive mindset has taken her on some incredible sponsored adventures around the globe, including riding 1000 kilometres across Mongolia on semi-wild horses in just nine days which bagged her another world record.

Holly’s next challenge is to attempt to climb Mount Cook. She will use her mountaineering experience, to pursue alpine-style climbing in the Southern Alps. Mount Cook (3,724 meters) is not big in comparison to the Himalayan peaks, however, it is equally tough and technical. Because of its heavy glaciation and rapid changes in weather and strong winds, Mount Cook is a serious climbing adventure.

Mountain Hardwear appoints Danny Harkin as Brand Director EMEA
HOKA ONE ONE PARTNERS WITH ‘A MILE IN HER SHOES’ CHARITY
Tweets by @SGBOutdoor
This site uses cookies in order to function properly and to allow us to improve our service. By using this site you consent to the use of cookies More info