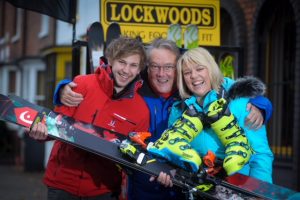 As latest retail industry figures reveal another worrying slowdown in sales, an award-winning family-owned ski and outdoor clothing shop is thriving thanks to the old-fashioned art of quality customer service.

Lockwoods first opened its doors in Warwickshire’s Royal Leamington Spa 41 years ago and has recently beaten competition from major online and chain retailers to be crowned best equipment and best clothing retailer at the Ski Club of Great Britain industry awards.

At a time when the British Retail Consortium (BRC) has reported non-food sales rose by just 0.2 percent in the year to October – the weakest growth since 2011 – the fact this independent store is not only surviving but thriving, in the digital age, can act as a welcome shot in the arm to struggling High Street stores across the country.

With bespoke customer service at the heart of what it does, Lockwoods is now run by the third generation of Graingers, with director Nigel, his sister Maxine and his daughter Hayley, along with Maxine’s son Oliver Watts, utilising the family’s decades of experience and knowledge to keep the business at the peak of a competitive marketplace.

Nigel said: “There are very few specialist shops such as ours in the UK now. The change in people’s buying habits to a more online-dominated scenario has made them something of a dying breed, with only around 100 in the UK currently, compared to probably 1,000 in the 1990s.

“We’d like to think we’re proof of the fact these type of shops can still prosper when run properly.”

After picking up twin Ski Club accolades as part of a national survey of around 30,000 people, it seems Nigel is not on his own in thinking Lockwoods can provide a template for High Street success.

He said: “We’re extremely proud to have been recognised with two awards. We’re not selling products which are any different to any other retailers in our sector but what we are selling is knowledge, attention to detail and great customer service.

“People can often spend thousands of pounds of their hard-earned money on skiing holidays, yet are prepared to potentially ruin that by ordering an ill-fitting pair of boots from the internet. We offer our time and knowledge, which helps customers avoid buying an ill-fitting ski boot which causes agony on the slopes.

“Each industry and each business is unique but regardless of what product they are selling, everyone has the ability to provide an exceptional customer service journey.

“Many High Street stores across the country are in a battle to keep their heads above water and we’re no different but we try to do the very best for our customers.”

With customers having travelled from as far afield as central Europe to take advantage of Lockwoods’ expertise, their very best is clearly keeping them on-piste.

To find out more about Lockwoods, visit www.lockwoods.com.

Lockwoods is a third-generation family-owned ski and outdoor clothing shop based in Rugby Road, Leamington. Established in 1976, it has recently been crowned best equipment retailer and best clothing retailer at the Ski Club of Great Britain industry awards, held at the Bluebird Café in Chelsea.

Tenson Back In the UK After 25 Years With Brand New Ski Wear
inov-8 at the forefront of a graphene sports footwear revolution
Tweets by @SGBOutdoor
This site uses cookies in order to function properly and to allow us to improve our service. By using this site you consent to the use of cookies More info