First Briton to top Everest since 2014

Sherpa Adventure Gear ambassador, Kenton Cool, completed his 12th successful summit of Mount Everest on May 12 to become the first Briton to reach the top of the highest peak since before the avalanche in 2014.

Alongside fellow mountaineer Robert Lucas, the pair successfully reached the top of the world’s highest peak together, with two Sherpa guides. 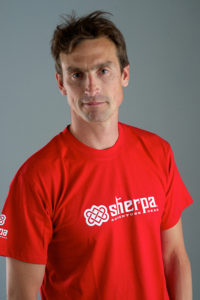 Kenton is one of the world’s leading alpine climbers having made history after climbing the Everest trilogy; Everest, Lhotse and Nuptse – in the space of five days. His career highlights include being the first Briton to summit Everest 12 times and the first non-Asian to summit Everest twice in one week.

In the highest reaches of the Himalayas, the Sherpa people lead the world in mountaineering with warmth, grace and good humour. Tashi Sherpa—upon discovering that his uncle assisted Sir Edmund Hilary’s celebrated 1953 expedition to the summit of Everest—founded Sherpa Adventure Gear in 2003 to honour his people by creating the best quality outdoor apparel made in Nepal.

The company employs hundreds in Kathmandu and Nepal at its headquarters, stores and manufacturing operations.

Gloves & gaiters – year round essentials
Star climber visits UK for sell out tour
Tweets by @SGBOutdoor
This site uses cookies in order to function properly and to allow us to improve our service. By using this site you consent to the use of cookies More info