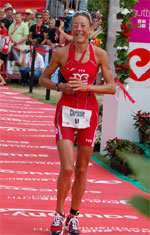 Three times Ironman World Champion and World Record Holder Chrissie Wellington MBE has recently teamed up with GREEPERS Ltd and is now using GREEPER® Sports Laces in her Brooks running shoes. After breaking the Iron distance triathlon world record recently Chrissie said “The Laces were amazing! I really do think they gave my feet the stability and comfort that I needed to run to a new world record!”

GREEPER® Laces are a patented lacing system that enables quick and easy release and fastening of the laces. The laces are made with highest quality 100% polyester laces (exactly the same as those supplied by the shoe manufacturers) and are not elastic. This is important for athletes: Edinburgh Sports Podiatrist Jacqui Baggaley notes “the use of regular non elastic laces ensures optimum shoe support for the feet during exercise and reduces the chance of injury”.

An important aspect of Chrissie’s partnership with GREEPERS is that a portion of all proceeds from product sales is donated to various charities, jointly agreed by Peter and Chrissie.

GREEPERS have launched a special edition “Chrissie GREEPER”. These special laces bear Chrissie’s motivational slogan “Live It, Love It” along with the famous Chrissie Smiley. For every pair of these laces sold GREEPERS will be donating £1 to the Jane Tomlinson Appeal, of which Chrissie is a Patron.

Rugby star starts trek challenge
Berghaus honours Bonington
Tweets by @SGBOutdoor
This site uses cookies in order to function properly and to allow us to improve our service. By using this site you consent to the use of cookies More info