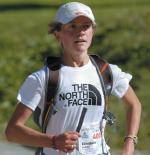 The North Face athlete Elizabeth Hawker, one of the brand’s endurance athletes, recently won first place in the women’s division at The North Face Ultra-Trail du Mont-Blanc.
For the sixth annual event, over 2,300 competitors from nearly 60 different nations left the starting line in Chamonix, France on Friday, August 29.
Outrunning all her adversaries, Elizabeth “Lizzy” Hawker, the English powerhouse completed her exploit on Saturday evening, shortly before 8pm, with a time of 25h19:41.
Lizzy entered her first ultra-run in 2005 and surprised herself and the world with her success. In the past few years she has earned a place amongst the ultra-running elite, with achievements that include a Gold Medal and becoming World Champion at the 2006 100km World Championships. She has also achieved first place at The North Face Ultra-Trail du Mont-Blanc in 2005 and first at the 2006, 2007 and 2008 Zermatt Marathons where she set a course record in 2007. Not only a formidable athlete, Lizzy also earned her PhD in Polar Oceanography during 2005.
Beginning and ending in Chamonix, the epic course covered 166 kilometres and over 9,400 meters of total elevation change. Taking place mostly on remote backcountry trails, some with considerable exposure, the course circled the Mont Blanc massif through three countries – France, Italy and Switzerland.
Earlier in the summer, The North Face-sponsored ultra-marathon runner Jez Bragg smashed yet another record by winning The Devil o’ the Highlands race in spectacular form. Jez knocked an incredible 46 minutes off the existing record of 6hrs 8mins, finishing in 5hrs 22mins.
He now holds the record for all three of the West Highland Way ultra races; The West Highland Way, The Highland Fling and The Devil O’ The Highlands – a unique achievement to date.
The Devil o’ the Highlands features the best competitors in the passionate sport of ultra-running – they are given 12 hours to complete the course, over mountain and vale from Tyndrum to Fort William.

Coleman joins STAG
IN BRIEF
Tweets by @SGBOutdoor
This site uses cookies in order to function properly and to allow us to improve our service. By using this site you consent to the use of cookies More info