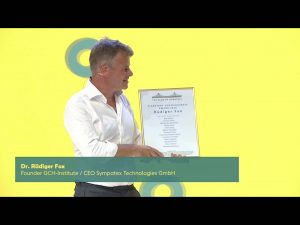 München / Unterföhring, 29. Juni 2020 – It was actually planned as part of a large three-day celebration at the Munich Trade Fair Centre on the occasion of the 80th birthday of Nobel Peace Prize winner Muhammad Yunus. Due to COVID-19, it took a largely digital form: the awards ceremony of the Club of Budapest’s “Planetary Consciousness Award” to Dr Rüdiger Fox, Founder of the GCH Institute and Managing Director of Sympatex Technologies GmbH.

Rüdiger Fox is an excellent turn-around manager that has led a series of large and medium-sized companies to success through his employee- & sustainability-centred leadership that builds on his academic research in the field of employee motivation & corporate happiness (as to be found in his book “The Business Case of Corporate Happiness”). His holistic “Gross Corporate Happiness” leadership approach aims at a consistent focus on a sustainable and meaningful purpose as well as on the well-being, empowerment and participation of all employees. The approach is based on the governmental model of the King of Bhutan, which the General Assembly of the United Nations unanimously recommended to all nations as a role model in 2011. Fox is using his current commitment as CEO of Sympatex not only to make the textile company one of the first to join the circular economy but also to make a public appearance time and again as an uncomfortable reminder for sustainability and visionary status quo challenger.

The Club of Budapest’s Planetary Consciousness Prize is awarded in recognition of the urgent necessity to evolve the consciousness of a critical mass of people in today’s societies in order to tackle the global challenges that the world faces today. The Prize, which is also known as the “Nobel Prize for Planetary Action”, honours individuals who, in their sphere of personal and professional activity, have effectively exemplified and promoted the generally necessary new consciousness in their personal and professional spheres of activity.

“There has hardly been a year in the still-young history of globalization in which we have been made so clearly aware that we as human beings are part of one single social and ecological fabric that needs to be respected and preserved,” said Rüdiger Fox during the award ceremony. “Artificial borders, whether in our minds or on the outside, do not protect us from the consequences that come with our global challenges. However, we can currently observe that we are capable of global action through collective insight, and that makes me very optimistic. It is a great honour for me to receive this award for my efforts to contribute to the expansion of planetary awareness worldwide, and I would like to dedicate it to all those who, like me, strive in their daily activities to promote dialogue on these essential issues.”

The Mission of the Club of Budapest and its founder Erwin Laszlo is to be a catalyst for the transformation to a sustainable world. It is based on the realization that the enormous challenges that humanity is currently facing can only be overcome through the development of planetary consciousness. The Club perceives itself as a builder of bridges between science and art, ethics and economy, between cognition and realization, between old and young, as well as between the different cultures of the world. www.clubofbudapest.org/clubofbudapest/index.php/en/

As one of the worldwide leading producers, Sympatex® Technologies has been a synonym for high-tech functional materials in clothing, footwear, accessories and technical fields of application since 1986. Together with selected partners, Sympatex develops, produces and distributes membranes, laminates and functional textiles as well as finished products worldwide. The Sympatex membrane is highly breathable, 100% wind- and waterproof and regulates the climate. It is 100% recyclable, climate-neutral, bluesign® certified, and it received the ‘Oeko-Tex-Standard 100’ certificate. It is also PTFE-free and PFC-free. The technologies and procedures are based on the principles of ecological responsibility and sustainability with a special focus on the optimal carbon footprint. Sympatex is represented worldwide with sales offices and branches. www.sympatex.com

Ex-Team GB ultra runner to attempt ladies Guinness World Record for running the length of Great Britain
SCANDINAVIAN OUTDOOR AWARD to… POLYGIENE
Tweets by @SGBOutdoor
This site uses cookies in order to function properly and to allow us to improve our service. By using this site you consent to the use of cookies More info