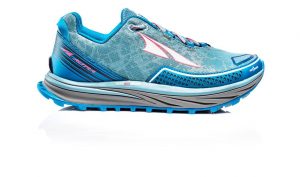 The Altra Timp fills a gap in the brand’s trail line. With a stack height of 29mm, it’s for those who want a little less cushion than Altra’s Olympus (36mm), but more than the Lone Peak (25mm).

Like all Altra trail shoes, the Timp is named for a Wasatch mountain peak where the Altra team runs for inspiration. It’s the locals’ nickname for Mt. Timpanogos, a massive peak with an iconic trail to the 11,749-foot summit, the second highest peak in Utah’s Wasatch Range.

We call the Timp our ‘long day’ shoe,” said Altra founder Golden Harper. “It’s perfect for ultramarathoners like Jeff Browning, an Altra athlete who wore prototypes of this shoe for the Hardrock 100 in 2016 and at Western States in 2017. It’s ideal for long hikes or runs to the summit of its namesake mountain or Rim-to-Rim at the Grand Canyon. The Timp has plenty of protection, yet runs light and nimble.”

Built on the same performance last as the Superior 3.0, the Timp has a similar fit, but with 6mm more protection underfoot. It features asymmetrical lacing, a new MaxTrac outsole with a trail rudder and a cushy InnerFlex midsole.

The upper has a new reflective pattern to keep runners visible in any lighting and has drainage holes to allow the release of excess water. The Timp weighs just 10.7 ounces for the men’s sample and comes in red, blue, gray and chive. Women’s sample size weighs 8.9 ounces and is offered in orchid, blue and deep lime.

PrimaLoft updates industry benchmark insulation to include 55% recycled content
EOS Networking APP Returns for 2017, New Sponsors Secured & Further Speakers Announced
Tweets by @SGBOutdoor
This site uses cookies in order to function properly and to allow us to improve our service. By using this site you consent to the use of cookies More info