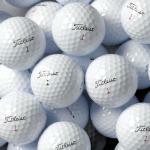 Callaway and Titleist will be striking each other off the Christmas card list this year (if they were on each other’s list in the first place) after the United States District Court in Delaware granted Callaway’s request for a permanent injunction to stop sales of the Titleist Pro V1 family of golf balls, effective from January 1, 2009, due to an infringement of Callaway patents.
However, the November 10 ruling might not trigger a seismic shift in the ball market – so dominated by the Pro V1 in recent years – as Acushnet announced that the injunction will not affect Pro V1 sales, as production was converted in September  to adhere to the patents in question.
Acushnet, Titleist’s parent company, also announced that they will appeal the ruling.
The root of the court battle is in Callaway’s claim that Titleist infringed four Callaway patents in producing the Pro V1. Callaway won the initial patents claim in December 2007, and Acushnet’s request to over-turn the decision was also rejected in court on November 10 this year.
“Callaway Golf has invested millions of dollars in Research and Development to create innovative products … and has protected those products with one of the broadest patent portfolios in golf,” says Steve McCracken, chief administrative officer for Callaway Golf. “We are very pleased with today’s decision which will stop the sale of these infringing Pro V1 golf balls.”
“We strongly disagree with the judge’s ruling and will file an appeal,” said Joe Nauman, corporate and legal executive vice president of Acushnet. “However, it’s important to recognise that this ruling will not have any impact on our ability to supply our customers with Pro V1 golf balls because of the following actions which we have undertaken. In September 2008, we converted production of the existing Pro V1 models so that they are outside of the patents in question; and we have also developed and will be introducing new and improved Titleist Pro V1 products in the first quarter of 2009 that are also outside the scope of the patents in question.
“Our Pro V1 golf balls are the product of technology developed and accumulated by the Acushnet Company over the past 20 years,” Nauman continued. “Acushnet is the industry leader in developing golf ball technology and has over 650 active golf ball patents – more than any other manufacturer. Over 65 of these patents are related to the Pro V1 family.
“We will continue to defend ourselves vigorously and we fully expect to prevail in having all claims of all four patents at issue determined to be invalid in the appeal process,” Nauman added. “Our confidence is underpinned by the fact that the U.S. Patent and Trademark Office has issued final office actions which have determined these patents to be invalid.”
So it seems we have not heard the last of this battle. On the question of whether Callaway will be seeking damages from Acushnet, a Callaway Golf spokesperson refused to comment.

Winter Running
A great Result
Tweets by @SGBOutdoor
This site uses cookies in order to function properly and to allow us to improve our service. By using this site you consent to the use of cookies More info