Walking in a winter wonderland 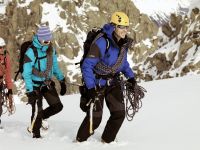 For many, the heavy snow and cold weather that caused travel chaos and brought everyday life to a shivering halt as winter took hold was not welcomed. However, those in the outdoor industry have their fingers crossed that it means a bumper few months for business

Turn on a news broadcast during periods of exceptional winter weather and you’ll be hard pressed not to see a shivering correspondent stood in a field, normally with a desolate motorway over their shoulder, dressed head to toe in some of the biggest names involved in the outdoor industry.

And while these news items normally bring tails of hardship and misfortune owing to bad weather, they say there is no such thing as bad publicity. Combating the cold with a branded garment clearly visible on screen and then beaming it into millions of homes around the UK would warm the cockles of any CEO’s heart.

Berghaus says it receives a lot of exposure through these means as a lot of journalists are kitted out in its clothing. But it is more interested in the upturn in business the weather has brought with it.

The snow that fell at the end of November and the start of December heralded a jumpstart for the outdoor industry, as far as Berghaus brand president Richard Cotter is concerned.

According to Cotter, a dry summer, mild autumn and slow start to the winter had made trade sluggish as consumers put off buying wet- and cold-weather clothing. But the sudden flurry of snow brought about a dramatic surge in direct sales and orders from retailers.

Berghaus began selling direct to the public via its website in May, but this coincided with a period where temperatures sat above the seasonal average. However, the early snow brought about a double-digit growth in traffic to the Berghaus website, with online sales increasing by more than 50 per cent.

Sales of garments like hats and gloves in the Berghaus stores in London, Bristol, Manchester and Gateshead also increased 13-fold, while interest from retailers for increased winter stock rose sharply.

Cotter said: “We had actually been in the grip of a mild autumn and early winter. That situation was clearly reflected in immediate business for outdoor brands and retailers, as people put off buying any cold-weather gear.

“The very sharp change in conditions was immediately reflected in both information gathering and sales.”

For the full article, see SGB Outdoor January 2011, which can be read here.

North Face sets $3bn target
Berghaus achieves training record
Tweets by @SGBOutdoor
This site uses cookies in order to function properly and to allow us to improve our service. By using this site you consent to the use of cookies More info