Wilson backs Paddy Slam, or is it? 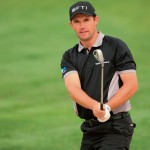 As the 2009 Tour season starts to pick up momentum towards our favourite azalea extravaganza at Augusta, Wilson Staff has announced an attention-grabbing consumer offer: they will refund any purchase of Wilson Staff Tw9 wedges bought between March 1 and April 9, 2009 (up to a retail price of £84.99), if their man Padraig Harrington wins the Masters.

So is this Wilson Staff being – potentially – extremely generous as Harrington attempts what would be an astounding three-majors-in-a-row achievement? Or is Wilson only making such a risky offer now that it looks as if world number one Tiger Woods will be returning to one of his very favourite hunting grounds, where he has captured four of his 14 majors? Or is it simply because they are struggling to move the Tw9 wedges?

“Padraig clinched his second Open title and the US PGA with a variety of memorable shots around the greens and the Tw9 wedges played a big part in his success,” says Doug Wright, Wilson Golf Europe’s business director. “Now we’re backing his performance at Augusta – where he finished tied fifth last year – with a promotion that offers golfers a great deal.”

Harrington used the 54º and 60º Tw9 wedges in the Open at Royal Birkdale last year, reportedly putting them in is bag as soon as he first tried the clubs, two weeks prior to the Open. The series has seven loft options between 48° and 60°, and they are available in anti-glare satin (RRP £74.99) or black PVD (RRP £84.99).

Not only did Harrington finish tied for fifth in the 2008 Masters, but he was tied for seventh in 2007 and he has enjoyed three top-10s at Augusta since 2002, so who knows?

OIA appoints new director
The Twilight Zone
Tweets by @SGBOutdoor
This site uses cookies in order to function properly and to allow us to improve our service. By using this site you consent to the use of cookies More info